Malacca (Malay: Melaka; Tamil: மலாக்கா, simplified Chinese: 马六甲; traditional Chinese: 馬六甲) dubbed "The Historic State",[citation needed] is a state in Malaysia located in the southern region of the Malay Peninsula, next to the Strait of Malacca.

The state is bordered by Negeri Sembilan to the north and west and Johor to the south. The exclave of Cape Rachado also borders Negeri Sembilan to the north. Its capital is Malacca City, which is 148 kilometres (92 miles) south east of Malaysia's capital city Kuala Lumpur, 235 kilometres (146 miles) north west of Johor's largest city Johor Bahru, and 95 km (59 miles) north west of Johor's second largest city, Batu Pahat. This historical city centre has been listed as a UNESCO World Heritage Site since 7 July 2008.

Although it was the location of one of the earliest Malay sultanates, the local monarchy was abolished when the Portuguese conquered it in 1511. The head of state is the Yang di-Pertua Negeri or Governor, rather than a Sultan.

Tourism is a booming industry in Malacca. It is a popular travel destinations for Singaporeans during the weekends. Malacca has adopted as its slogan, "Visiting Malacca Means Visiting Malaysia" ("Melawat Melaka Bererti Melawati Malaysia"). 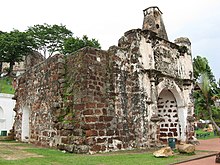 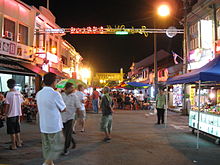 Coastal side of Malacca

Some famous night markets can be found along Jonker Walk in Chinatown during weekends evening and along Puteri Beach in Tanjung Kling. In total, there are around 87 night markets around Malacca.[63] During the Islamic fasting month, special night markets are opened along many major roads throughout the month.[64]